Saturday 20th October saw ESKA hold its annual championships at the Stevenage Hombu. As always, the event was a great success and all that attended enjoyed the high quality of karate on show. From the youngest junior to the oldest adult; everyone showed a high level of commitment and spirit. Judges were particularly impressed with the etiquette of the students participating.

The morning began with all participants lined up opposite the association judges and officials. After a formal bow, the participants were given their participation medals and certificates. As an association we feel it is important to recognise that taking part in a competition like this is an achievement in itself. Therefore we want to reward all students that give up their time to represent their clubs at the championship.

The first events of the day were for the junior Green belt and below. It was great to see so many participants with smiles on their faces. The judges of these events were delighted by the high standards displayed by the lower grades.

Following the lower grades; the rest of the junior events began with the same level of enthusiasm. Some of the techniques shown by brown belts in their katas were truly outstanding and highlighted their commitment to their training and the input of their instructors.

With junior events finished, it was time for the adults to begin. With lower grades going first, the day eventually culminated in the black belt categories. The black belt kata category saw many of the association’s instructors displaying high quality techniques and fantastic spirit. This resulted in a final between Sensei Jo Potts (3rd Dan) and Matthew Passingham (2nd Dan) with Matthew Passingham emerging the victor. Well done!

With the kata completed the only events left were freestyle events which, as always, were fiercely contested.
In the mens event, after several rounds of freestyle against many spirited high grade brown belts, the final saw two new finalists! Greg Wood (Hitchin) vs. Matthew Passingham (Knebworth). They both did amazingly well and it was a close fought final, with Matthew eventually emerging as the victor.
Although there weren’t many entries, the woman’s final between Natalie Bertina (Hitchin) and Susan Page (St Albans) was a great one to watch. Well done to Natalie for edging this one and walking away with first place.

Overall it was a great competition with over 350 entries. The contestants all showed great determination and karate spirit.

It was also good to see students from Chesterford competing for the first time, having only opened there doors this year and still managing to walk away with a share of the trophies.

Below are the official results from the day. Click on the tabs to reveal the results to each category.

GROUP 10B – Freestyle [Pool A] (Yellow to Green Belts)

GROUP 10B – Freestyle [Pool B] (Yellow to Green Belts)

GROUP 3B – Freestyle (Female All Grades)

Where are the photos? A good question! This post is huge enough already so we’ve created another post with the pictures and this can be found here…Click Here for Pictures

However here are some of the Judges and Referees letting their hair down after a long day!

As always, we must thank the support from the spectators who really encouraged all participants. We appreciate that the competition is a long day but well worth it.

There was over 50 black belts helping on the day judging, refereeing and officiating supported by adult kyu grades which kept the championship running smoothly.

Matt and Fiona Raper for organising the area running order on the day and making sure the trophies and medals are where they should be!

Thanks must also go to our stand in photographer Sensei Angus Pearson (5th Dan).

A huge thank you to Sensei Michael Dodds and Janet Dodds for organising all of the forms, posters and planning all of the draw sheets and eventual result stats.

Of course a final thank you must go to Sensei Nursey (9th Dan) and Raesa Nursey (5th Dan), for making the event possible and overseeing another successful year of karate at ESKA.
We are lucky in ESKA as many associations do not hold competitions due to the cost and logistics involved. Thank you to everyone for another great event. 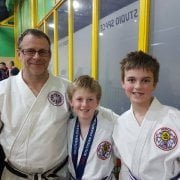 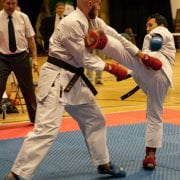 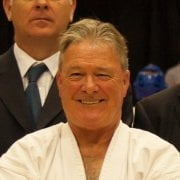 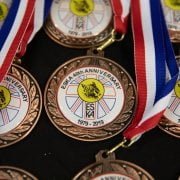