On Saturday 30th April 2022 ESKA lost a dear member of its family to Cancer. Sensei Rand was long serving member of ESKA, holding the rank of 5th Dan, respected and loved by all.

Sensei Rand a previous RAF pilot who flew the Tonado and Harrier fighter jets decided in the 1980’s to take up what was to be another love of his, Shotokan Karate.

Jeff Sensei originally trained under John Van Weenan Sensei in the early 1980s. He joined ESKA in the mid-1980s training under Mike Nursey Sensei, our current Chief Instructor. This was followed by a short time with the Martial Arts Academy training under Paul Toby Sensei.

He followed this by training under Steve Austin Sensei where he gained his Shodan (1st Dan) and Nidan (2nd Dan) under Nick Adamou Sensei (9th Dan), the Chief Instructor of the International Association of Shotokan Karate.

In 2009, Sensei Jeff was awarded the prestigious Edward Docwra Spirit Cup and in 2018 Jeff Sensei was awarded his Godan (5th Dan).

In 2021 he decided to step back from the day-to-day running of the Cambridge club which he had run for many years and proudly handed it over to three of his students; Masaya Sensei, Jo Sensei and Russell Sensei.

In February 2022 Jeff had an operation to remove the cancer and fought throughout, saying at the time he hoped to return to the Dojo with a much better sense of humour. Sadly on Saturday 30th April 2022 he lost his short battle..

Jeff was a family man and he brought this to his karate. He coached, encouraged, mentored and supported everyone he came across. He was a hugely respected and loved member of the ESKA family. His Sochin Kata was almost as famous as his two tone moustache and he loved having a laugh and joke. He will be greatly missed by all of us in ESKA and our thoughts and prayers are with his family and friends during this difficult time. 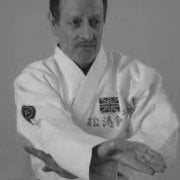 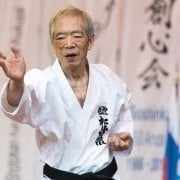