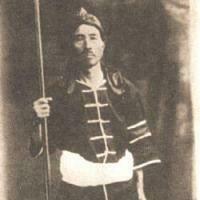 Chatan Yara also known as Yara Guwa, Ueekata, and Yomitan Yara, is credited with being one of the first to disseminate martial arts (te) throughout Okinawa Island.

Yara is most noted for teaching Takahara Peichin who would later become the sensei (mentor) of Sakugawa Kanga, the father of Okinawan karate. Depending on Sakugawa’s birth date, Yara may have been his teacher also (based on the kata he taught). Yara was from Chatan Village, on Okinawa Island.

According to most accounts, Yara’s parents sent him to China at the age of 12 under the advice of his uncle to study the Chinese language and the martial arts. It was here he mastered the use of the bo staff and twin sais under the guidance of his teacher Wong Chung-Yoh.

Shortly after returning to Shuri around 1700, Yara came to the assistance of a woman being harassed by a samurai. First avoiding the samurai’s sword attacks, Yara acquired an eku (oar) from a nearby boat and successfully disarmed and killed the samurai. Soon after this rescue, he was recruited by local officials to teach his martial art to the local community for the purpose of self-defense.