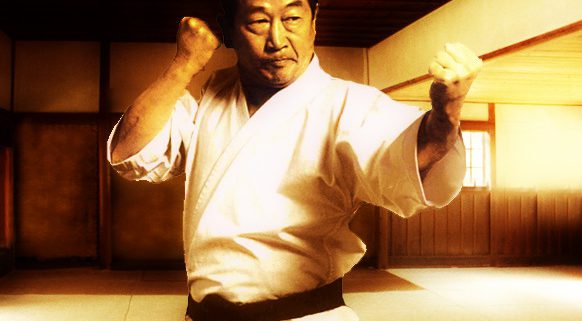 Sensei Nakayama was born in 1913.  He studied Kendo in great detail and was the man who let Funakoshi use his kendo hall when his own dojo was demolished.

After finishing university he went to China to study the Chinese language and also other types of martial arts, at the age of 19. After 11 years he returned to Japan where he started training under Master Funakoshi privately in 1931, every day. He was known as the Master’s master.

He became the chief Instructor of the JKA when Funakoshi stood down and was very concerned about competition karate taking over. Sensei Nakayama has been credited for the ushiro geri (back kick) and gyaku mawashi geri (reverse roundhouse kick) as well as taking karate abroad and explaining martial arts to Westerners. He mainly taught in an American army base in Japan but later started teaching in universities.

While he was in China he studied anatomy and Physiology and passed this on in his teaching (bones, muscles) until the day he died. He has published many books including the very famous ‘Dynamic karate’. He passed away in April 1987 aged 74 as a 10th Dan. At one of Nakayama’s karate clubs he began teaching 2 men, Kanazawa in 1952 and Enoeda in 1953.