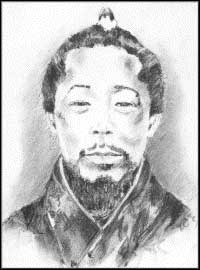 Matsu Higa often called Machuu Hijaa is a semi-legendary martial artist in Ryūkyūan history who was a direct influence on the development of karate and kobudo, especially with respect to bōjutsu.

Pechin is social class of the Ryūkyū Kingdom. A resident of the island of Hama Higa, he was perhaps a student of the Chinese emissaries Zhang Xue Li and later Wanshu, who would have taught him techniques of quan fa.

Ryūkyūan history relied mainly on oral tradition prior to the 20th century, so it is difficult to separate fact and fiction (or embellishment). It is said that Higa had forearms like tree trunks and that he could crush a coconut in his bare hands, though he stood only 5 feet 2 inches (157 cm) tall and weighed about 140 pounds (64 kg). Legends state that Higa with his bō stood up to the head-hunters of Formosa and to Japanese pirates from the north and never lost a battle.

What has turned out to be a big misunderstanding, however, is that Higa was the teacher of Takahara Peechin, who in turn taught Sakugawa Kanga. Takahara Peechin (1683-1760) died 30 years before Higa (1790-1870) was born. Higa was one of the first to codify a system of kata and techniques. His contributions live on in several weapon katas, especially for tonfa, sai, and bō.

In a book of Taira Shinken: Ryukyu Kobudo Taikan, (published in Tokyo 1964) it is written about a man, Pechin from the island Hama Higa. He lived from 1663-1738. This Hama Higa Pechin demonstrated Tode und Saijutsu to the 5. Tokugawa Shogun.